IN THIS ISSUE:
The new CD is ready!!
August in Stockholm
Camp Democracy
Whole Wheat Radio
On to Ireland!

Announcing the release of "If I Can't Dance" -- 16 songs that are sure to get your toes tapping -- all in the joyous revolutionary spirit of Emma Goldman. My deepest thanks to the 75+ folks who sent me $100 or more to get this project finished.

The recording opens with "Emma Goldman" - a rollicking rock tune by Paul Gailiunas and Helen Hill, and ends with a dazzling arrangement of my pal Suzanne Buirgy's touching "Lullaby." This CD features some of the most-requested material from some of my previous cassette releases as well as seven songs recorded in June 2006 at Wilkin Audio in Pittsburgh.

There's a lot of my hometown Pittsburgh embodied in this CD - starting with the cover art. It's an updated reworking of my trademark logo, now infused with Pittsburgher Andy Warhol's inspiration, thanks to the creativity of Randy McSorley of Kaukauna, Wisconsin. (Randy did the album design for Have You Been to Jail for Justice? and Union Maid, too).

This CD features some of my favorite early work, which I think can be seen in new ways as it blends with some of the best in contemporary folk music.

The first track includes a supporting vocal on from Pittsburgh rocker Bill Deasy. A cast of mostly Pittsburgh musicians is featured.

There's a terrific recording of Pittsburgh songwriter Jack Erdie's "Let Their Heads Roll" - a consummate protest song in the spirit of Phil Ochs -- one of my earliest inspirations. And Jack dropped by the studio to add some fabulous vocal harmonies.

Amazing fiddling wizard Bob Banerjee, returns to the current sessions for work on "Lullaby" and "Let Their Heads Roll," complementing his early work on "Amelia Earhart's Last Ride," and "Dr. Jazz." I found out this June that those early sessions of Bob's were his first studio work!! Bob has gone on to work with Gaelic Storm, the Irish band featured in the film "Titanic."

Janis Coppola's fantastic clarinet work brings excitement to Roy Zimmerman's hilarious "Defenders of Marriage," swing to Kristin Lems' "Days of the Theocracy" and pathos to Ted Warmbrand's evocative, "Who's the Criminal?" See the No More Deaths/No Mas Muertes website to learn more about the facts that inspired this haunting and powerful song.

Longtime fans will appreciate the inclusion of "Dr. Jazz," and "The Sheik of Araby," the two show-stopping duets from my days with D.C. Fitzgerald, my musical partner from 1986-1992.

There are only two originals on this CD - "Shell Game" and "Me Case con un Heroe." Both songs appeared originally on 1991's "Look to the Left," which is now out of print.

Once again, I've recorded a song by my friend and mentor, Jon Fromer. (Jon also wrote "We Do the Work" and "Oh, Bessie - Blues for Bessie Smith." This time it's Fromer's collaboration with Bernard Gilbert, "My Feet Are Tired," a very danceable tribute to Rosa Parks and the thousands of people whose sacrifices led to the success of the Montgomery bus boycott in 1955.

I'm particularly fond of my rap reworking of the old Irish standard, "Phil the Fluter's Ball." Complete with scratches and hip-hop Uilllean pipes, this rendition may prove once and for all that rap was invented by the Irish (or, it may prove that I don't get enough sleep.)

I hope you'll buy at least one copy of the CD right away. CDBaby has a contest on this month and the top 10 sellers of the month will get a song sent out to CDBaby's next 5000 customers on a compilation CD at no cost to the artists. It would really be great to get the word out like that!

If you meant to send me some money to help with the production, it's sure not too late. I've still got lots of expenses, plus a new CD coming out in a couple months called "Dump the Bosses Off Your Back." I'll be glad to put you in the liner notes of that one if you send me $100 or more.

and indicate how you'd like to be listed in the liner notes.

And if you have a favorite radio station that I ought to send the new CD to, let me know whose show you listen to, send me the station address, and I'll send the CD on to them with your compliments.

I've been incredibly busy on this tour of Sweden... the Left Party has hired me to do two or three shows a day 3 or 4 days a week to get people engaged in the issues for the coming election. There are some photos up on my blog of our dog-and-pony shows in downtown Stockholm. I had been telling my husband I felt like the IWW windmillers that Utah Phillips talks about... hopping up in front of the mike singing to draw a crowd for the speakers... just like Joe Hill.

No sooner had I said it than a call came from the IWW folks who maintain Joe Hill's house in Gavle as a museum. They invited me to perform last Sunday, and it was great.

I've got another busy week ahead of me here and then home to the Bread and Roses Festival in Lawrence, MA.

I'm thrilled and delighted and honored to be opening Camp Democracy with Cindy Sheehan, Ann Wright, Will Covert and others on September 5th on the Mall (Constitution Ave between 14th and 15th) in Washington, DC on September 5th. Veterans for Peace is sponsoring my performance, and I'll be joined by the fabulous Emma's Revolution. I hope to see some of you there.

The next time you're sitting in front of your computer for a while, tune in Whole Wheat Radio from Talkeetna, Alaska ... they have a really wonderful mix of independent music that I think you'll really enjoy.

I'm so excited to finally be touring Ireland professionally. If you have any friends in Ireland, please please encourage them to come to my shows. You can cut and paste dates from my calendar.

Details of all my upcoming dates are at http://annefeeney.com/calendar.html

That's it for September... hope to see you at one of these shows!
Posted by Unknown at 2:06 PM No comments: Links to this post 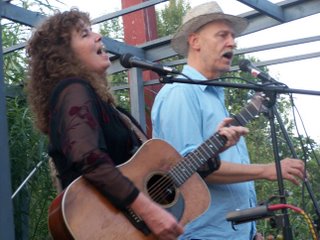 My performances for the Left Party were arranged by Daniel Sestrajcic and my wonderful friend Jan Hammarlund, seen here singing "Days of the Theocracy" with me at Vinterviken in Stockholm.
Posted by Unknown at 11:30 AM No comments: Links to this post

Instead of Beirut, I arrived in Stockholm on August 7th ... I was pretty beat up from the whirlwind tour Dave Lippman and I had made up and down the left coast, but by August 12th I was participating in a series street rallies for Sweden's Vänsterpartiet (the Left Party). Their plan was to move into some public space, quick set up a display and PA, have a folksinger start singing to gather the crowd, and then have a speaker from the Left Party get folks excited about the elections (coming up on September 17th)... We'd do this at one location for an hour or so, then pack up and move to another.... at first some folks seemed skeptical 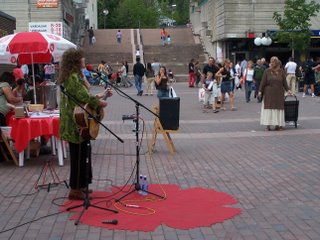 but eventually they'd warm up to it 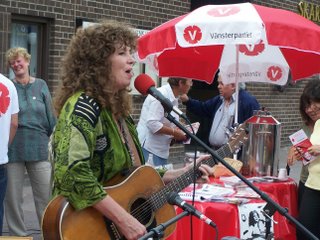 In one location a bunch of kids came up to me for some quick guitar lessons... 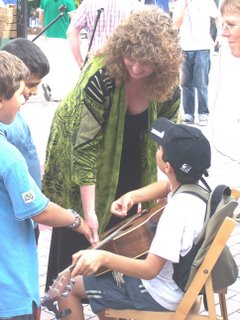 Then on August 13th I was invited to perform at Joe Hill's house, which is now a museum maintained by the IWW in Gävle, Sweden ... Here I am, in front of the house, setting up in the garden... 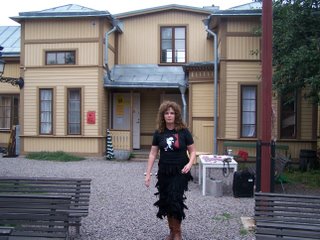 I was pleasantly surprised by the crowd and how very enthusiastically I was received! Thanks to Christer Forsberg for arranging it. 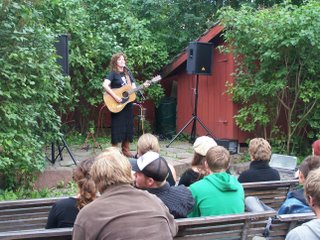 Posted by Unknown at 9:57 AM No comments: Links to this post

IF I CAN'T DANCE is ready! 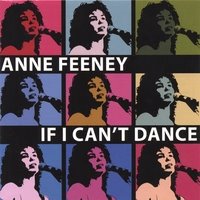 You can order my new CD, If I Can't Dance, from CDBaby now!

Have You Been to Jail for Justice in France?

I discovered this page the other day - maybe someone can pick up this French translation of Have You Been to Jail for Justice and make it rhyme....