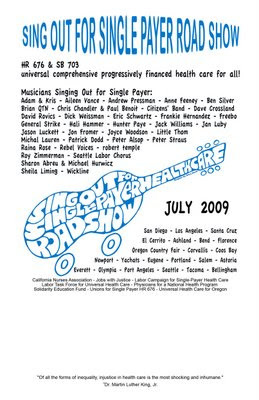 Thanks for subscribing to The Fellow Travelers' Advisory. If you didn't, this incredibly wonderful SING OUT FOR SINGLE PAYER ROAD SHOW wouldn't be happening. This isn't just a newsletter, it's a vehicle for major organizing. Your support for my work and my music mean more than I can ever express. I love it when you write back and tell me what you've been up to, when you share news of your community, suggest song ideas or places I should play.


You can buy my cds at http://cdbaby.com/all/unionmaid

You can listen to and/or download my extremely cool new single "We're Nursing as Fast as We Can" at http://soundclick.com/share?songid=7729813

SING OUT FOR SINGLE-PAYER ROAD SHOW!

It was only a few weeks ago that I began imagining turning my regular summer tour of the Pacific Northwest into a barnstorming Chautauqua for Single Payer Health Care. My friends Kay Tillow and Jerry Tucker both thought it was a great idea. I got some seed money from them. Chris Chandler whipped up a poster for me. I sent out my June newsletter on May 22nd and this project took off!


This whole concept was developed during Holly Near's wonderfully collaborative and energizing "SING OUT THE VOTE OHIO" tour last October. Holly is an inspiration!


I've never seen so many people so excited about an issue. Almost fifty musicians between San Diego and Bellingham have joined the tour. We are going from border to border! Jason Luckett of LA is doing the whole tour with me! As I write this, over 236 of you have sent donations ranging between $10 - $100.... (Well, one $150 donation too - Thanks, Dave!)

Contributions have already come in from Denmark, Sweden, Ireland, Northern Ireland, England, Canada and from 34 states!


If you haven't made a donation yet, IT'S DEFINITELY NOT TOO LATE! There's a "Donate" button at http://annefeeney.com/specialevents.html that you can securely click on. Or use the "Donate" button in the right hand column here >>>>


If you're not a "click and donate" kind of person, you can send a check to:


(If your check is for $500 or more and you want it to be tax-deductible you can make it out to "Universal Health Care for Oregon." Still send the check to me, so that I can make sure that UHCO credits it properly.)

Another fun way to support the tour is to download my new recording of Joan Hill's fabulous "We're Nursing as Fast as We Can." All sales during June and July will benefit the tour.

And there are posters at http://annefeeney.com/specialevents.html that you can print out and customize and hang in your neighborhood (of course, if you don't live in CA, OR or WA it might be somewhat impractical).


GO ON THE ROAD VICARIOUSLY!

Every day of the tour we're going to send out tweets (http://twitter.com/annefeeney), YouTube Videos - http://www.youtube.com/user/SingOut4SinglePayer, and a phone message at 1-800-749-0558. In the meantime, I've collected some great YouTube clips on Single Payer - including the Austin Lounge Lizards' hilarious music videos "The Drugs I Need (Progeniveritox)" and "Pirates of the (Health)Care-i-bean," and regular Facebook updates... so stay in touch with us!


GETTING THE SHOW ON THE ROAD -- MANY THANKS TO!!!

My cousin Eileen Metcalfe would have been 64 this July 14th - she died unexpectedly in mid-May. My Jacksonville friend David Thundershield Queen shed his body and moved on after a courageous and inspiring battle with cancer. And I was stunned to learn that my friend Mary Kerchner died of a heart attack last Monday. Our time here is so brief, eh?

Dan and Monique celebrated their second wedding anniversary in Quito on June 16th. He's studying for the DC bar - talk about long-distance learning!

I'm off to Sweden at the end of the Road Show and so looking forward to seeing my husband and all my friends in Sweden. I think I'll be busy performing too. If you want me to come and play for you while I'm in Sweden July 31 - August 23rd, contact fredrik@goatbridge.com .

This year's Ireland tour is full. It's going to be a great trip - Galway, Dublin and Clare. And we have a fabulous group.

I'll have my 2010 dates soon. Look for them at http://annefeeney.com/Pages/enchantedwaytours.html soon!

That's all for this month... I know there's a lot more going on in the world, but this opportunity for real health care for all of us is taking all of my time and energy...

Here are the dates:


Wednesday, July 22nd, 2009 8:00 PM
Sing Out for Single Payer Road Show
Anne Feeney, Jason Luckett, Wickline, Brian QTN and more!
rossr241@aol.com is the contact
Everett, WA
If you'd like to help with hosting this Single Payer Road Show call me at 412-877-6480 or email me at anne@annefeeney.com

Sunday, July 26th, 2009 7:00 PM
Sing Out for Single Payer Road Show with Rebel Voices, Anne Feeney, Sharon Abreu and Michael Hurwicz, Jason Luckett and Ben Silver!
Tacoma, WA
Price: donations
call me at 412-877-6480 or email me at anne@annefeeney.com to help with this show!!


I really need your help.

I've rounded up over three dozen wonderful professional musicians who have committed to a "Sing Out for Single Payer Road Show" - health care for all. The first show is in Los Angeles on July 2nd, with 20+ concerts along the way, ending in Bellingham on July 27th. Check out http://annefeeney.com/specialevents.html for a list of all the places we'll be visiting on this tour. And what a cast!

This nearly border-to-border road show will engage thousands of audience members in dozens of key congressional districts in three states and generate thousands of letters and phone calls to Congress and to President Obama.

The tour is dramatically energizing single-payer activist organizations in all three states, and the concerts will generate much-needed donations for local organizations.

I'm about $10,000 short of what I need to make this happen. I want to be able to offer each musician $100/show + gas money. You can tell from the roster of musicians that these are not people who can afford to give up a week's wages or more to come on this tour - but they're doing it anyway, because they trust me and know that this is a unique moment in history. It's important to be able to leave most of the money we raise at these concerts in the communities where the concerts take place so that local organizers can continue their important work.

If you each sent me $10 right now, I'd have enough money to pull this off in a big way.

Please send a check to:

as soon as you read this.

If you want to make a tax-deductible contribution of $500 or more, you can send it to:

If you want to use a credit card, click on this Paypal button on the right hand side of this blog.

Or maybe you can help me with an in-kind contribution or loan:

If you live on the west coast - I need clipboards, stationery, postage stamps, envelopes, the use a digital camera, the use of a digital video camera and tripod, the use of a van from Los Angeles to Seattle

Or maybe you can forward this to a generous friend...

You've never let me down, and I'm sure you won't now, either.

It seems I've always got my hand out for something-or-other when I come to you... You may get tired of it, and believe me, I get tired of it, too. I can't even apologize for it - It's a big and necessary part of my life's work.

But I so appreciate the folks who get it and just step up to the plate. Many thanks to Jerry Tucker, Kay and Walter Tillow, Labor Campaign for Single Payer, Peter Yarrow, Dr. Paul Hochfeld, Neal Eckstein, Karen Newman, Hilary Chiz and Matt Redabaugh for chiming in generously and early!

I want to thank Sign and Display Workers' Local 510 for donating a 10' x 4' banner to our Road Show... and Gary Huck for the fabulous graphic.

Together, WE CAN make progressively funded comprehensive universal health care available to everyone in this country!


My love and thanks to all of you!


PS - If you buy some of my CDs this month, it'll help keep me from going under at home while I'm out on this adventure! http://cdbaby.com/all/unionmaid

Posted by Unknown at 2:01 PM No comments: Links to this post