It's been a great great year for me in so many ways, but I end 2009 depressed, disgusted and demoralized ... 30,000 more soldiers headed to the place where empires go to die - Afghanistan... And the cobbled piece of dung that they're calling our health care plan is so disappointing. It seems like the only thing politicians in this country can agree on is that women are second-class citizens (what with all their crazy bodily parts that are not at all like normal penises). What happened to all the hope and change we were promised? Obama can't even sign the Land Mines Treaty. Bah, humbug...

I'm headed in a couple days to Copenhagen, where the pundits say the chances of any meaningful action on climate change range from extremely unlikely to utterly impossible. Still, I will gladly join the 30,000+ people in the streets urging our leaders to do better. And I'll continue to work and hope that next year will be better.


On the plus side, 2009 was a great year with too many highlights to mention - but I'll mention a few anyway... The Sing Out for Single Payer Road Show (July) was clearly the highlight of my year - I'm still basking in the warmth of your response to my call for help in organizing that wild and wonderful cultural extravaganza. There are no words to express the gratitude I feel to all of you for making that dream a reality. But the Irish tour was fantastic (August), as was marching on Blackwater (April) with the Catholic workers, seeing my son Dan graduate from Georgetown Law School (May), and adding a new province (Manitoba) to the places I have performed, meeting Reps. Bob Filner and Dennis Kucinich, the wonderful midwest tour with David Rovics, Reiko and Leila (October), the Graduate Students' Union victory at the University of Illinois, the victory for Heartland Human Services in Effingham, IL.

The thing that keeps me going is you. You are such a big part of my life... My work would be impossible without you. I know you're busy, but if you can, PLEASE take a good look at my 2010 (below) and let me know if you have any ideas about where I can or should perform in the coming year. I hope your holidays are restful, joyous, and that the coming year brings us better news.

DAVID ROVICS AND I ARE ON PROGRESSIVE RADIO and DEMOCRACY NOW!

HELP MAKE THE HOLIDAYS MERRY FOR STRIKERS IN PEKIN, ILLINOIS

If you'd like to go to Ireland with me next year, how about letting me know that? So far I've got about half a dozen commitments.. but I need more than that to go ahead... Email me if you want more information... anne@annefeeney.com The dates are August 10-19 and/or August 22-31.

The coming year is taking shape for me. In January I'm visiting my son Daniel and his wife Monique in Quito, Ecuador - I haven't seen them since last May - I'm just aching with loneliness for them ... I'll be there from January 11th to January 25th. Then my work year begins in earnest. I'd love to see you. If you'd like to see me in your hometown in 2010, please take a look at this and see if you have any ideas on how to get me there... I need a *lot* more work!

February 5th I'm flying to Seattle and picking up a rental car. I'm still looking for lots of dates on the left coast mostly between Seattle and the Bay Area ... http://annefeeney.com/calendar.html - If you know someone in San Luis Obispo or thereabouts who could put together a show on February 27th, I might extend the tour back down to LA/San Diego.

March 10th I'm flying to Jacksonville, and still have lots of Florida dates to fill. Let me know your ideas! http://annefeeney.com/calendar.html

THE MIDWEST WITH EVAN GREER - APRIL 2010

In early April, Evan Greer and I will be doing a tour of the midwest. If you're ready for a return visit - especially if I missed you last October (Cleveland, Kansas City, Cape Girardeau, St Louis) - please get in touch.

In late April I'm hoping to line up a mini-tour, quite possibly with my pal Roy Zimmerman, from Detroit to New York City.


PITTSBURGH TO KERRVILLE TO DETROIT - MAY/JUNE 2010

Then, I'll be driving to the Kerrville Folk Festival and picking up gigs along the way. My flexible route takes me along I-70 to Columbus, down through Cincinnati, Louisville, Nashville, Memphis, Little Rock, Texarkana, Dallas, Austin, Kerrville. While I'm at the festival, I'll fly up to Long Island for the Working Class Studies Conference and then return to the festival. After the festival I'll be looking for
June 13 in Fort Worth
June 14 in Oklahoma City
June 15 in Fayetteville, AR
June 16 in Kansas City or Springfield MO
June 17 in St. Louis
June 18 in Indianapolis and
June 19 arrive at the Great Labor Arts Exchange followed by the US Social Forum in Detroit.

If I'm accepted into Oregon Country Fair, I'll fly out to Oregon for that the weekend of July 9-11. I'd be happy to add something a day or two before or after the fair.

If you have any ideas for work in Sweden, please contact Fredrik Gleisner - fredrik@goatbridge.com - and he'll be happy to arrange shows in Sweden.

August 10th I meet my first group in Ireland. You should think about coming to Ireland with me. These trips are fantastic! Email me and I'll send you lots of information.

I'll be back in the United States for Labor Day, which is still not confirmed... so if you're interested, let me know.

At some point in the fall Bev Grant and I will do a tour together. I'm really looking forward to that.

I'm thinking about driving to SOAW next year as part of a HEN FOUNDATION fundraiser. If you're along the route - Washington, DC and on down the I-95 corridor - let me know if you'd like to try a show between November 12 and 18th.

That's as far as I've gotten in my 2010 plans... but I sure hope that my plans bring me to wherever you are!

DAVID ROVICS AND I ON PROGRESSIVE RADIO and DEMOCRACY NOW!

While we were on tour in the Midwest, David Rovics and I did a radio interview with The Progressive - a great magazine celebrating 100 years of independent progressive journalism. You can listen to the interview at http://progressive.org/radio/feeney09.html

Democracy Now! will be in Copenhagen for the summit. I spoke to Amy Goodman today, and it's very likely that David Rovics and I will be guests on DN! while we're all in Denmark. That will be exciting. Keep your eye out for us... http://democracynow.org

HELP MAKE THE HOLIDAYS MERRY FOR STRIKERS IN PEKIN ILLINOIS

The strikers of Laborers' Local 231 in Pekin, IL - on strike against PAL health technologies - come into the holiday season with no paycheck and no strike fund. You can help. Send a contribution to:

If you are familiar with myspace, try http://www.myspace.com/guitarcarols and play the wonderful instrumental winter music my cousin Sean McCahill has recorded, but unfortunately, not released ... they're lovely and great music to play while you have holiday guests.

Congratulations to Gary Huck and Tavia LaFollette on the birth of their beautiful twin sons, Maxwell and Calder on December 1st!

And Chris Chandler http://chrischandler.org is engaged! He popped the question to Bay Area based Welsh artist Jen Delyth http://www.kelticdesigns.com/ last month. No wedding date is set as of this writing.

The fabulous David Elsila is recovering well from very serious surgery.  I'm sure he'd love to hear from his friends.

My daughter Amy, her friend Jesse Dalton, my sister Kathleen, her daughter Kimberly and Kimberly's son Casey will all join me and my husband in Sweden for the holidays. We're even planning a trip to the north pole (almost)!

Why not treat yourself and a friend to a trip to Ireland with me and a few other exciting activist types! or come alone and meet wonderful new friends! 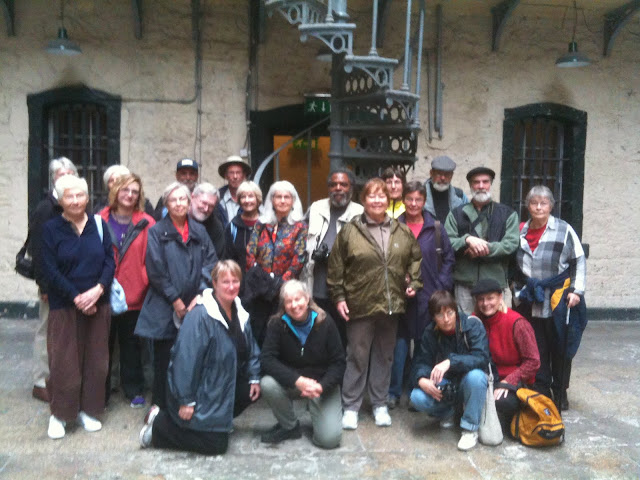 If you're buying books this holiday season, let me recommend Powell's books in Portland. They have an inventory to rival Amazon's *and* the workers are happy members of the ILWU - a great union. Use this link
http://www.ilwulocal5.com/shop-union/ to shop at the world's best union bookstore!

Breaking news!! Our friends at the Center for the Study of Working Class Life have released a DVD just in time for the holidarys called "Why Are We in Afghanistan?" Written by Michael Zweig and illustrated by the fabulous Mike Konopacki, this 27 minute DVD will really enlighten you on what's going on. Only $9.95 + shipping from http://whyareweinafghanistan.org (The website wasn't up when I checked this link, but Michael says it should be up and running very very soon...)

You can download my Christmas single - "Brave New Christmas" (by my wonderful friend John William Davis) at http://www.cdbaby.com/cd/annefeeney7 - for only 99 cents - or download the whole cd, "Dump the Bosses Off Your Back," for $9.99, or have a CD sent right to you, or your favorite working class pal for only $14.99

My other CDs make great gifts too - http://annefeeney.com/all/unionmaid

I also want to highly recommend Chris Chandler's new cd - So, Where Ya Headed? http://www.cdbaby.com/cd/chrischandler12 - His partnership with Paul Benoit is generating some of Chris' finest work ever. You'll love it.

Finally! a beautifully produced full length CD from my occasional touring buddy (and great young songwriter) Evan Greer. Evan composed "Ya Basta!" which is on my "Dump the Bosses Off Your Back" and a staple of my current repertoire. "Never Surrender" is available at http://www.cdbaby.com/cd/evangreer and includes all my Evan Greer favorites - "The Picket Line Song," "Never Surrender," "Ya Basta!," "I Want Something."

You can hear a four song sampler of Brian QTN's stunning new release, "Guitarred and Feathered" at www.myspace.com/QTNstrumentals ... this instrumental guitar album is simply gorgeous. A check for $17 to Brian Cutean, 85444 Teague Loop, Eugene, OR 97405 will land this in your mailbox before you can say, "How'd that get here so quick?" (sez Brian)

My talented pal Roy Zimmerman has a refreshingly different album of holiday songs called "Peacenick" http://www.cdbaby.com/cd/rzimmerman4 which include, "Buy War Toys for Christmas," "Christma-Hanu-Rama-Ka-Dona-Kwanzaa," and the charming "Christmas is Pain" and nine more. All of Roy's stuff is great.

If there's a more beautiful holiday song than John McCutcheon's "Christmas in the Trenches," I don't know what it would be. You'll find it on his wonderful "Winter Solstice" album at http://www.folkmusic.com/record/r_sols.htm

David Rovics has just released two cds... one a retrospective of his finest compositions to date - "Waiting For the Fall", and the other brand new songs - "Ten Thousand Miles Away." I bought them both. You should too. http://davidrovics.com You might also be interested in David's children's album "Har Har Har! Songs About Pirates, Penguins and Punk Rock Babies" - also available on his site.

And single-payer advocates will enjoy The Austin Lounge Lizards "The Drugs I Need" http://www.cdbaby.com/cd/austinll2 - which also includes a children's song.


Posted by Unknown at 9:05 PM No comments: Links to this post