IMMEDIATE DESTINATIONS: (see details at the end of this newsletter and continuously updating at http://annefeeney.com/calendar.html)

I have to pack now and run for my flight back to Pittsburgh where I'll be doing a hometown show for the first time in a while... joined by many dear and talented friends...

I hope you'll take a minute to read about my adventures past and future...

I hope you'll tell your friends to come and see me.

I hope you'll buy my cds at http://cdbaby.com/all/unionmaid

I hope you'll drop me a line and tell me what you're up to.

WHY DO WE NEED THE EMPLOYEE FREE CHOICE ACT?

I wish the labor movement hadn't risked so much of its prestige and invested so much of its energy in this bill, which so few people understand. It reminds me of the ill-fated anti-scab legislation labor put so much effort into at the start of the Clinton years. While most people have no idea what EFCA means or will do, ALL Americans are struggling with this miserable so-called health care system we have. How I wish labor's first big battle in the Obama years had been for single payer health care...

Still... we desperately need a bill like the Employee Free Choice Act, and I hope you're all doing everything you can to educate your friends and neighbors about how important it is... here are some prime examples of why we MUST reform labor law in this country:


For twenty years I've admired my indefatigable friend and mentor Kay Tillow. Since 1989 she's been sticking by the Nurses' Professional Organization of Kentucky in their quest for union representation. Twice an overwhelming majority of the nurses have signed cards seeking union representation. Twice their arrogant employer has tried to bully them into believing that they don't know what they want. Coercion, lies, intimidation, lawlessness, illegal firings - Employers stop at nothing to keep unions out, and they do so with impunity. Every 23 minutes someone in the US is illegally fired for union activity. These nurses ought to be the poster children for labor law reform - yet they are but one of thousands of strong cases around the country for why we MUST have the Employee Free Choice Act. Their case got the attention of the New York Times:

The battle has ground on for 20 years. In 1989 and again in 1994, a clear majority of nurses at a Louisville, Ky., hospital signed cards saying they wanted a union. But each time a majority of the nurses later voted down the idea when it was put to a secret ballot.

Organized labor points to the fight at Norton Audubon Hospital as proof that America’s labor laws need to be overhauled: judges ruled that management had prevailed by illegally intimidating and firing nurses.

Nurses who want a union plan to try again, and they had expected a Democratic president and Congress to retool labor laws to make it easier to win. Instead, in Louisville and around the country, organized labor may be facing a major setback in the most contentious fight over labor laws since the 1940s.

Right now, unions seem to lack the 60 votes needed to block a Senate filibuster against the Employee Free Choice Act, the bill that would give workers the right to have their union recognized as soon as a majority signs cards calling for a union. The change would make it easy to bypass secret-ballot elections, which are traditionally harder for unions to win.

With Congress returning Tuesday from a two-week recess during which unions deluged the airwaves with advertisements supporting the bill, labor leaders voice confidence that Congress would still enact some far-reaching legislation this year to make it easier to unionize — and they are discussing making some modest changes in the bill to help firm up support. In recent months, corporate interests have lobbied vigorously against “card check,” as the bill is known, because it would most likely enable unions to add millions of members and increase labor’s clout in Washington and at bargaining tables nationwide

The battle is occurring after years in which organized labor has been on the defensive. Union membership has declined to 7.4 percent of private sector workers from 25 percent three decades ago. Labor leaders say the nation’s laws have unfairly handicapped them. They say management has many advantages, including an ability to campaign against unions the whole workday, while union organizers are barred from company property.

Card check would be fairer, they argue, because workers could organize without the expensive, prolonged campaigns that precede secret-ballot elections in which management often presses workers to vote against the union and sometimes illegally fire pro-union workers.

“The Employee Free Choice Act is critical to building an economy that works for everyone in this country again,” said George Miller, Democrat of California, the chairman of the House Education and Labor Committee and the bill’s chief sponsor in the House. “The time has come to no longer coerce and intimidate workers who seek to have a say at work.”

Management says the current process is fairer because workers are able to hear arguments from the union and management. Moreover, business leaders say, secret-ballot elections are more trustworthy than card check because union organizers can bully workers into signing pro-union cards.

“Given the deceitful tactics unions employ when trying to get nurses to sign these cards, this is dangerous legislation that should not be enacted,” Stephen A. Williams, president of the hospital’s parent, the nonprofit corporation Norton Healthcare, wrote to the nurses in March.

In the Louisville fight, the National Labor Relations Board ruled that the nurses had changed their minds about the union in 1994 mainly because management conducted an often illegal campaign against unionization.

An N.L.R.B. judge concluded that management had committed so many serious violations of the law — firing and demoting nurses, threatening to close the hospital if the union prevailed — that it made the possibility of a “free choice by the employees slight to nonexistent.”

Ann Hurst, a pro-union nurse who the board said was illegally demoted, still remembers. “They came after us with a vengeance,” she said. “They created a lot of fear about what would happen if we had a union.”

Ms. Hurst complains that workers have to run a gantlet of threats, firings and bullying to obtain a union. She said that in 1989 such tactics caused the union to lose by 11 votes. After the 1994 effort, when Columbia/HCA owned the hospital, the N.L.R.B. found that management had violated the law in dozens of ways, including telling the nurses that if they unionized they would lose all their benefits and the hospital would be sold and their jobs would disappear.

The N.L.R.B.’s rulings described weeks of psychological warfare. Management put television sets in the nurses’ stations. “They would show these horrible old movies showing miners’ strikes and violence involving unions,” said Betty Schmitt, a nurse who has since retired.

She said management put up signs reading: “Be careful with whom you associate. You can be found guilty by association.” Many nurses were scared to be seen talking to union supporters, she said.

In 1994, the nurses voted 366 to 220 against unionizing — a sharp reversal considering that a majority of 348 nurses had originally signed pro-union cards. Management said the nurses in the majority did not want to pay union dues or have an outside party speak for them.

In a 1997 decision about that election, an N.L.R.B. judge ruled that management’s law-breaking was “so serious and substantial” that he ordered the hospital to recognize and bargain with the union, the Nurses Professional Organization, since a majority had initially signed pro-union cards.

My friends in Elkhart were dealt a terrible blow. The NLRB has upheld the decertification election in which the scabs voted the UAW out. Now Vincent Bach has no reason to bargain with the UAW over the fate of the striking workers - and the UAW no longer has to pay strike benefits. An American tragedy.

My locked out sisters and brothers of AFSCME 3494 in Effingham, IL sponsored a lovely concert for me last night. http://www.effinghamdailynews.com/local/local_story_119130512.html - I presented them with the $1035 I collected for them at the UALE conference last weekend in Washington, DC. They were very touched. 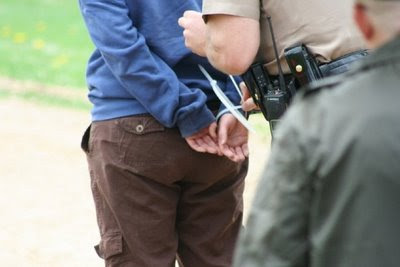 
Approximately 100 people registered for the STOP BLACKWATER! conference organized by Clearwater http://www.noprivatearmies.org/ and the Catholic Workers http://www.catholicworker.org/ in Stockton, IL. The conference featured keynotes by the fabulous Kathy Kelly, Jeremy Scahill and Ann Wright. Blackwater's many crimes were considered, as well as the increasing danger to democracy posed by a privatized army. On Monday, April 27th, 22 of the conference participants were arrested in a non-violent direct action against Blackwater. While attempting to serve NOTICE OF FORECLOSURE for moral bankruptcy on Blackwater, the 22 Catholic workers and other peacemakers were taken into custody by state police and put in custody in Galena, IL.

It was a most inspiring four days of action. I had a heavy case of arrest fever, but restrained myself to make sure I didn't miss my concert for the locked out workers in Effingham. To learn more about Blackwater, read Jeremy Scahill's fabulous book: http://blackwaterbook.com/
BLACKWATER: The Rise of the World's Most Powerful Mercenary Army


SING OUT FOR SINGLE PAYER!!

I'm putting together a cultural workers' ensemble - SING OUT FOR SINGLE PAYER! - to sing all over northern California and Oregon and Washington Sate July 4-28th. If you would like to welcome a talented group of musicians singing out for single payer health care into your community, contact me. If you are an artist, musician, juggler, magician or acrobat interested in single payer health care and you'd like to be part of this, contact me. If you'd like to help underwrite this tour, contact me. anne@annefeeney.com or 412-877-6480

I'll be celebrating Pete Seeger's 90th birthday along with a few thousand of his friends at Madison Square Garden on May 3 - see http://seeger90.com If you're going and want to get together somewhere ahead of time, call me at 412-877-6480 - If you can't go, but would like to honor Pete and his work, please consider a donation to Clearwater http://www.clearwater.org/

The concert is made possible in part by a grant from the Pennsylvania Labor Education Center, Indiana University of Pennsylvania, of the PA State System of Higher Education (http://www.iup.edu/laborcenter).

Sunday, May 3rd, 2009 8:00 PM
Pete Seeger's 90th Birthday Party
Madison Square Garden
New York, NY
http://seeger90.com
Price: $19.19-$1250
Ahhh, I would be thrilled to be performing at this show, but I'll be celebrating my sister Kathleen's mutual birthday with Pete from the upper balconies.... cheering on my companeros Larry Long, the NYC Labor Chorus and Tommy Sands as they join a legendary cast paying tribute to a great mentor and wonderful human being - Pete Seeger. All proceeds benefit Clearwater!

Looking for work anywhere between Coos Bay and Seattle


Thanks for reading this! Now, please forward it to your friends!
Posted by Unknown at 6:41 PM No comments: Links to this post