The Berrymans Return!  Don't Miss It! 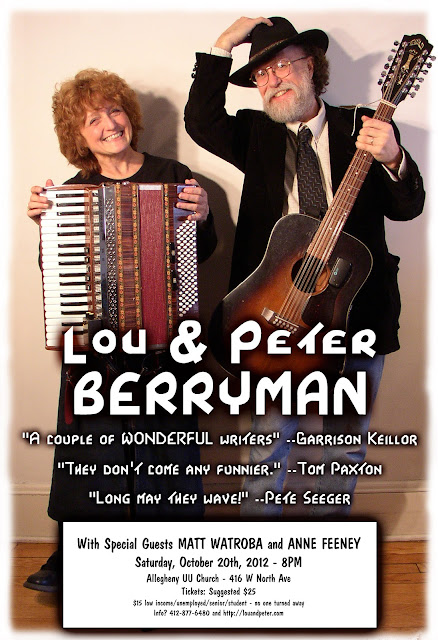 I'm so pleased to be able to present Lou and Peter Berryman again.  Their shows are always so hilarious, inspiring and energizing.  Don't miss this chance to hear them in Pittsburgh.  This time they're traveling with our super talented pal Matt Watroba, who hosted the best folk show ever in Detroit for 22 years - "Folks Like Us" and now hosts a folk show online for Folk Alley.  He's a fabulously talented musician and he and I will both do some performing that evening.

Saturday, October 13th, 2012 10:00 AM
WE ARE ONE Rally - Join Us to Stand Strong for Public Education and Unions!!
Mercer County Courthouse Lawn
Mercer, PA
724-748-4972
Price: free
call Judy Hines at the number above for more information.

shows continuously updating at http://annefeeney.com/calendar.html
cds available for purchase or download at http://cdbaby.com/all/unionmaid

I had so much fun getting to sing for my pal Liana Kennedy's union - CUPE - (the Canadian Union of Public Employees) at the University of Victoria on my Canadian tour last month. And I spent a wonderful morning workshop with Vancouver's awesome Solidarity Notes choir!  And Michael Goodman and Sharon Sjerven hosted a lovely brunch for me.  Jim and Joey and Chris and Liana & Frances provided their usual fabulous hospitality, and all the presenters were great... thanks Tark, Karen, Ken & Carol.

Congratulations to the Chicago Teachers!  Well done! I'm in Cleveland right now with the amazing president of ATU - Larry Hanley -  organizing a "Vote Transit" conference.  He's a fantastic true-blue trade unionist who truly knows which side he's on. (and he knows the value of labor culture!  hooray!)   I'm  predicting now that Republicans are NOT going to be able to vote for Romney.  They'll prefer a more moderate Republican like Barack Obama.  I'm hoping Obama maintains his lead in PA so that I can comfortably vote for Jill Stein without worrying that Romney would carry Pennsylvania.  (Pennsylvania is the state that James Carville described as 'a large state with a big city on each end and Alabama in the middle)  In 1972 Richard Nixon, then considered a right-wing Republican, supported a Guaranteed Annual Income for all Americans.  Can you imagine Obama doing that?  But still, I urge you all to vote. If voting didn't change anything they wouldn't have shoved so many Voter Suppression Acts through the legislatures.   Do it for the same reason you would pick up a piece of trash on the street.  It's not going to save the world, but it only takes a few minutes, and it's the right thing to do.  It certainly doesn't discharge your civic duties ... we must all continue to raise hell and work to build a better world. FRIENDS AND FAMILY - BIRTHDAYS AND SUCH

Karen Brandow is doing much better! Keep Jon Fromer and Jerry Tucker in your hearts, thoughts and prayers.  And add my wonderful activist friend Al Dale, from Bellingham, WA to your list.  He's really struggling to come back from a stroke.  Al's an amazing guy... among other things, he was the original faculty sponsor for the Black Panthers on campus at San Francisco state.  He and his wife of many years, Dotty, have been stalwart peace and justice activists for better than 6 decades.  You could send Al a get well card:

I'm going to be off for most of the rest of the year to help Amy any way that I can in planning her wedding.  It will be wonderful, too, to be in Pittsburgh with my husband and to work on some of the many domestic projects I have in mind.

Many many thanks to the generous friends who have stepped up to help me with my expenses. My bank account must have a sensor... as soon as anything accumulates in it, I have an economic meltdown commensurate with the amount...  last month I lost a tenant, had to paint the rental, replace the carpeting... just as my water heater and washer at home gave up the ghost.

If you're within 100 miles of Pittsburgh, you don't want to miss the Lou and Peter Berryman concert on October 20th..  See you there (I hope!)

Posted by Unknown at 12:34 PM No comments: Links to this post