All the details appear at the end of this message and continuously update at http://annefeeney.com/calendar.html

I still have a few seats left for this year's wonderful Ireland tours. Tom Pigott and I met at the Kerrville Folk Festival over Memorial Day weekend and had a terrific time planning the exciting details of the upcoming tours. We'll have a complete itinerary available for you soon... but the trips are going to be absolutely sensational!

If you'd like some information, please email me at anne@annefeeney.com and I'll send it off to you. I'd *love* to go to Ireland with you, and these trips which I arrange in conjunction with Tom Pigott of Enchanted Way Tours are just about the best way you could ever see the Emerald Isle... http://enchantedwaytours.ie/

My sister Kathleen sent me an eloquent summary of what's going on:

"I watch the plume of greed that looks unstoppable. Mother earth is hemorrhaging and I am afraid the doctors cannot help her. I grieve for those beautiful reefs and waters where I've had so much fun. I sit on the couch and cry. I hate BP and I cry. I could not believe that they did not cancel the Indie 500 gas-burning waste .. it was such a strange experience to hit the remote .. see oil killing the earth and then watch the Indie .. and then watch one wasteful air stunt show after other to "Celebrate America" ... Blue Angels gushing fuel lines in the sky to amuse people .. ughhh"

And BP is allowed to supervise its own cleanup?? It's like asking the Mafia to do something about organized crime. This video contains some pretty salty language, but the common sense of the argument advanced really gives us something to think about as we watch the cleanup of the Gulf.

FAIR had a great summary of the oil industry PR blitz leading up to the last round of offshore drilling permits...

There has to be a better way... and it's going to require some massive rethinking by our planet's leaders ... It's not just the Gulf of Mexico, and it's not just BP..

Here's a compelling story about an ongoing (and worse) environmental catastrophe in Nigeria...
http://www.guardian.co.uk/world/2010/may/30/oil-spills-nigeria-niger-delta-shell

How bad does this stuff have to get before people finally realize that the guys in charge *really* don't know what they're doing???

I've got my ticket to go visit Dan and Monique after their son in born in Quito in late August/early September. I'm sooooooo excited!

I'm spending most of the 18 day Kerrville Folk Festival camping with my daughter Amy. Kerrville is always such a joyful reunion with friends from all over ... It's particularly wonderful this year, since I'm booked to perform on Tuesday, June 8th! And, to add to the joy, I'm splitting the evening with Chris Chandler and Paul Benoit! 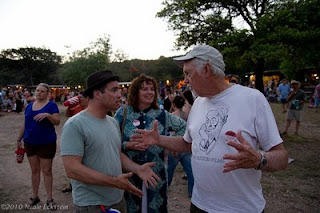 Here's a photo by Neale Eckstein of me, Eric Schwartz and Ronnie Cox at KFF
In the April Fellow Travelers' Advisory I showed you my husband, Julie Leonardsson's new painting in its very early stage.... It's still a long way from finished, but here's an updated photo. 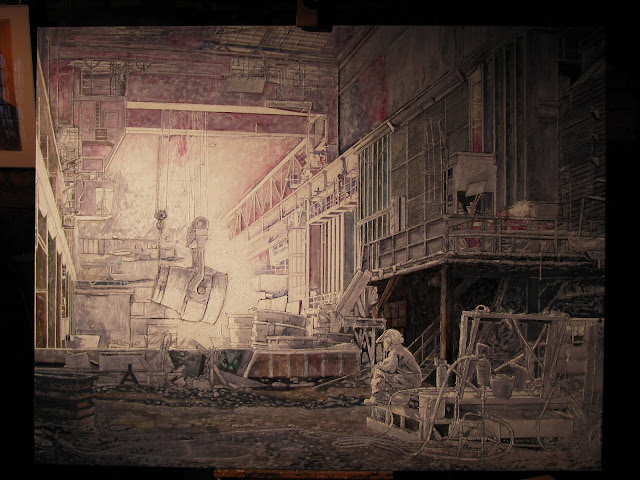 His talent takes my breath away! I can't wait to see this painting "in the flesh" when I get to Sweden in July! Julie's work, including this painting, is featured all summer at the prestigious international Avesta Art exhibit. Here's an article about the show that appeared in Dala Demokraten: http://www.dalademokraten.se/sida/id/107449/

http://fellow-travelers-advisory.blogspot.com/2010/03/april-2010-anne-feeneys-fellow.html ( this is a link to the April version of the same painting...)

I found the link to the Bill Moyers show where John Blasingame of LIUNA and the Iowa Citizens for Community Improvement bursts into a lovely performance of "Have You Been to Jail for Justice?" ... If you want to watch it, click below... (He doesn't sing until the very end of the segment, but it's fun to watch..) I'll get to see John again this month when I play the Laborers' Union Midwest Regional Conference.
http://www.pbs.org/moyers/journal/04302010/watch.html

LINK OF THE MONTH

This story from Denmark really made me smile in a month where smiles were hard to come by. Thank goodness for the wonderful people still doing the right thing every day! Enjoy...

WE'RE NURSING AS FAST AS WE CAN - 99 CENT DOWNLOAD AVAILABLE!

Click on this box to buy the definitive recording of this wonderful song by Joan Hill -- It features me on guitar and vocals, Oliver Steck on accordion, Roger Day on tuba, and Doug Wilkin on percussion... enjoy!! If you're going on vacation this summer, why not stock up on some of my CDs to keep you entertained on the drive? http://cdbaby.com/all/unionmaid - They make lovely hostess gifts for the folks you visit, too!

Labor Day is still not confirmed... but it looks like I'll be in the midwest from early September through early October... If you'd like to host a show in Indiana, Illinois, Wisconsin, Minnesota, Iowa, Missouri or Ohio, get in touch... If you've never hosted a show before, but you'd like to see me perform in your hometown, get in touch and I'll show you how to do it!

For part of this tour, there is the possibility of booking me with the amazing Bev Grant ... and getting the chance to host her fabulous "We Were There" program

I'm going to Ecuador from October 5th-13th to meet my new grandson, but then I'll be back in the US from October 14th until the end of November.

Once again, I'm going to the School of the Americas Watch at Fort Benning. I'd like to book a tour from Pittsburgh to GA and back... So, how about it ...

We call those who fight for justice to converge and act, and to reflect on the potential of our position and the power of our connections. Although we have built organizations that push forward an integrated, multi-issue, multiracial strategy, we have yet to build our movement on a scale relative to our sisters and brothers in the Global South. The USSF II offers the opportunity to continue to gather and unify these growing forces. We must seize this moment and advance our collective work to build grassroots leadership, develop collective vision, and formulate strategies that keep a strong movement growing. There are many ways to get involved. Your organization can join the NPC, you can join the working groups or start building regional and local committees to ensure a massive and diverse participation in Detroit, June 22-26, 2010. Get more info at http://www.ussf2010.org/

"Anne Feeney is the greatest labor singer in North America." -- Utah Phillips
Posted by Unknown at 4:22 PM No comments: Links to this post