Thank you so much for your interest in this concert!! We have stopped website sales. There may still be a few tickets left. Call Bev Grant at 718-788-3741 to check on "will call" availability.

If you prefer, you may email Bev at BEVGRANT1@aol.com. Also, we will be putting any unclaimed seats for the show on sale (or re-sale) at 8PM, and forming a waiting list, first-come-first-served, the night of the show beginning at 7:15PM.

If you are unable to get tickets, we hope you will consider supporting the event by making a donation using the button on the right sidebar.
Posted by d@ve at 10:56 AM No comments: Links to this post 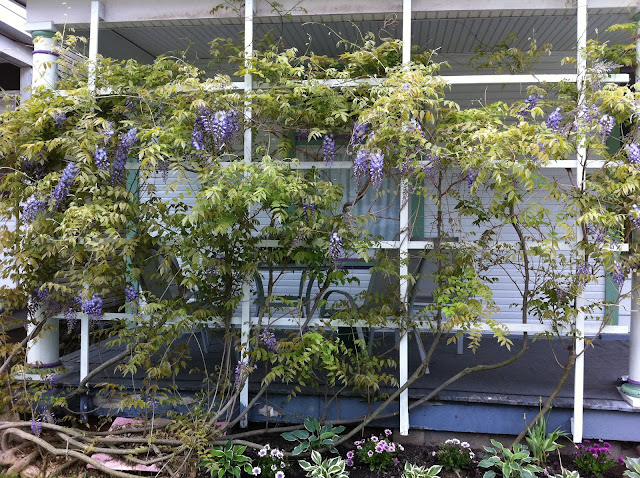 You can buy my CDs at http://cdbaby.com/all/unionmaid
You can get the latest health updates on my cancer battle at http://caringbridge.org/visit/annefeeney
You can help me through this prolonged stretch of involuntary unemployment by click on the "Donate" button to the right of this message, or by sending a check to:

It's not much of a May newsletter if I don't get it out today, so it'll be short and sweet.  Spring is finally here, and my wisteria is in fragrant bloom!  I begin my seventh year of monthly newsletters to you with this issue. Thanks for tuning in, and especially for writing back.

As many of you know, it turns out that I broke my right wrist on April 8th when I totalled my sweet 2009 Chevy Malibu on the PA turnpike...  this is *not* the view you want through your windshield ... 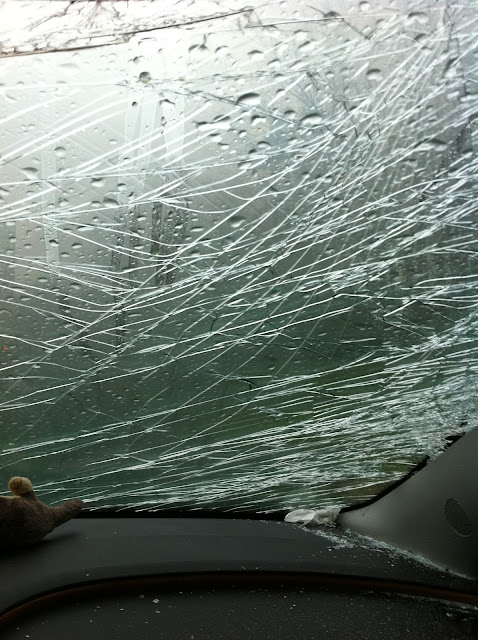 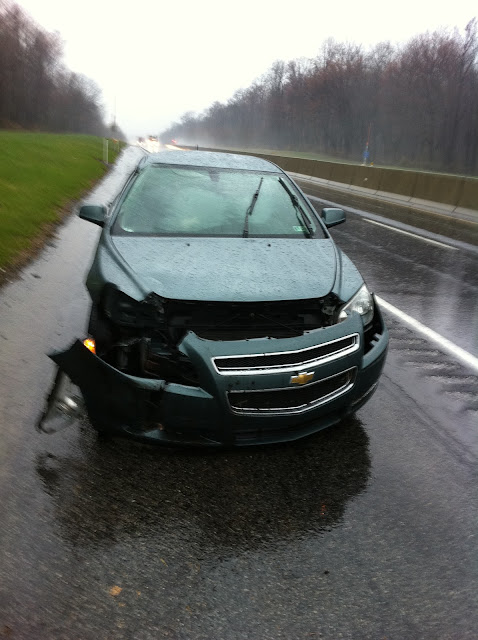 All in all I did about $16,000 damage to my car.  The 18 wheeler I collided with caught something on my right front wheel and just about ripped off the front end of my car.  I bounced off him like a pinball and began spinning all over the turnpike... hitting the truck three or four more times before I was able to control the car and get it to the side of the road.  Needless to say, I had to get a new car.  Now I've got a 2008 Ford Taurus with 32,000 miles on it.  I love it. And I'm looking forward to driving it a lot this year... once my cast comes off.

Turns out I was a little premature with the good news on my PET scan.  The brain MRI showed a 7mm tumor in the back of my head.  I have decided it's a weasel turd.  I had it zapped with a gamma gun a week ago, and we almost certainly got rid of it.  We'll repeat the brain MRI at the end of June and see what we see.

In the meantime, a consult with a new infectious disease specialist reveals that I may never have had the awful MAC infection that I've been treating with massive doses of antibiotics for the past nine months!!  A few days ago I had a CT-guided lung biopsy to see just what this is in the upper right lobe of my lung.  The results of the different tests and cultures will come in over the next few weeks.  I'll keep you posted.  But in the meantime, I'm off those awful antibiotics and my stomach is quickly returning to normal!  YES!

The newspaper is gone, but the Tribune's clock lives on as an Oakland landmark.... 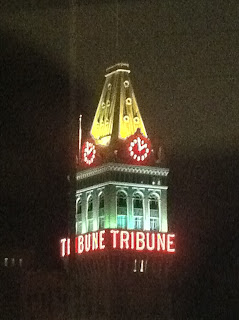 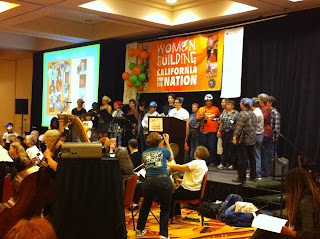 I got a chance to go out and visit Chris Chandler (http://chrischandler.org) and his fiancee Jen Delyth in Oakland.  I got to see their wonderful new house, with a real bird of paradise blooming in their front yard!  I got to see two of my high school pals, Maureen Carney Barnato and Kay Magill - great fun.  We had dinner with dear pal Shelley Kessler, wonderful Seattle labor chorus singer and tradeswoman Aspen Swartz, and 95 year old folk treasure Faith Petric.  Another night ex-pat Pittsburgher Jimmy Kelly, who lives in Oakland now,  took me on a tour of Jack London Square.  And I got to hang out at the "Women Build California and the Nation" conference.

Another absolute highlight of the trip was getting to Vukani Mawethu's 25th anniversary at the new and greatly improved Freight and Salvage.  Vukani Mawethu is a singing ensemble that specializes in South African freedom songs.  They have raised thousands of dollars for HIV/AIDs relief for African children and many other worthwhile causes.  On their 25th anniversary they presented a lifetime achievement award to my oh-so-talented friend and companero, Jon Fromer.  I've recorded three of his songs, but this video features him singing a Malvina Reynolds song - "I Cannot Sleep" with Aileen Vance during the "Sing Out for Single Payer Roadshow" in 2009. (http://www.youtube.com/watch?v=2fQiOEYPutk)

Jon was recently diagnosed with stomach cancer.  He's got an uphill fight ahead of him, and I know he'd love to hear from you on his 65th birthday on May 11th..  Send him a card @

or email him at
mjfromer@gmail.com

He's a real true heart and class conscious warrior... a regular at the School of the Americas, a founder of the Bolshevik Cafe and the Freedom Song Network, an emmy award winning film producer, producer of the acclaimed "We Do the Work" series on KQED, member of AFTRA and the American Federation of Musicians. Send him some love...

My friend Judy Ancel is a labor educator at the University of Missouri in Kansas City.  She is brilliant, tireless, fearless and a *great* teacher.  The scurrilous pseudo-journalist Andrew Breitbart has set his sights on Judy and her colleague Don Giljium.

Breitbart is the slime who circulated the outrageously deceptive video that led to Congress de-funding ACORN before Breibart's treachery could be fully exposed.  Breitbart then turned his attention to USDA official Shirley Sherrod - nearly ruining her career before the NAACP and the Obama administration viewed his slanderous video and the actual speech from which Breitbart had cut and pasted his misleading and inflammatory garbage.

Being a Mom is one of the best decisions I ever made.  My kids are an endless source of joy to me.  If you're looking for something for your Mom (still) try this site - http://www.organicbouquet.com/

They have beautiful organic fair-trade flowers and you can even donate to your mom's favorite charity while you're buying them.  Here's the wreath that my daughter Amy sent me last year for Mother's Day... It's still gorgeous! 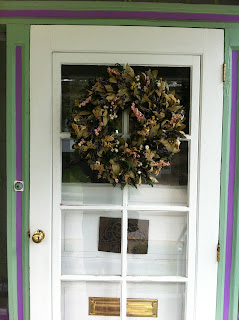 There are lots of cousins and dear friends that I hope are planning to come to my 60th birthday weeklong celebration at Deep Creek Lake in western Maryland.  If you'd like details about the festivities - which run from June 25-July 2nd - please contact my daughter Amy Berlin - amysueberlin@yahoo.com

Manny Fried - RIP
My friend Manny Fried died in Buffalo on February 25th.  He and I met at the 1990 Great Labor Arts Exchange, when he came to receive the Joe Hill Award. He was born on March 1, 1913, and died just a few days short of his 98th birthday.  He led a very active life.  He and I stayed in regular touch and I frequently stayed with him when my travels took me through Buffalo.  He was a great actor.  The last time I hung out with him he was joking about the film role he had coming up.  Manny was to play a corpse in a casket in the film.  He said "It's a little too close to my next big role."   Here's a nice article about Manny from the Buffalo arts newspaper.  http://blogs.artvoice.com/avdaily/2011/02/25/manny-fried-finally-retires/ 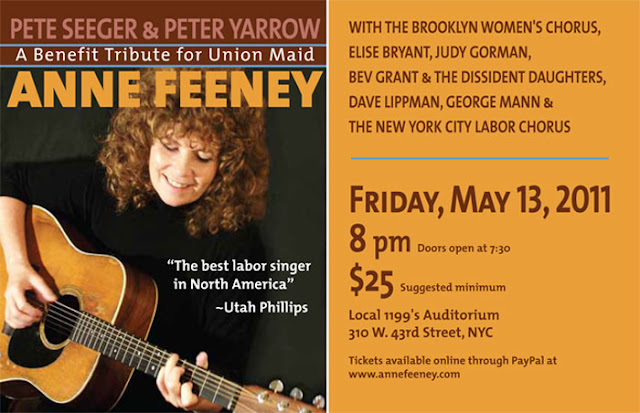 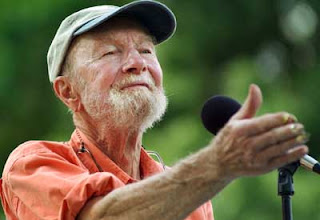 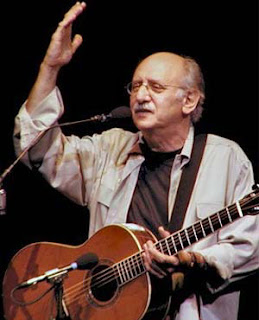 The fantastic benefit concert that's being organized for me in NYC is almost sold out! (no wonder, such a lineup!!)  Folks are coming in from Wisconsin, Florida, Seattle, Maryland, DC, Massachusetts, Pennsylvania and Texas...  It'll be a great reunion.  If you want to try your luck at getting a ticket visit my website - http://annefeeney.com or call Bev Grant 718-788-3741.

From there, I'm headed to a retreat for members of my union at the legendary Highlander Center in Newmarket, TN.  I'll also spend a week under the Texas stars visiting friends at the Kerrville Folk Festival.  I'll be there from 25th of May until June 1st.  From there I'm going on to the Regina Polk Institute for Union Women.  It's a great gathering of women from all over IL and the midwest.  This year I'll be a registered participant instead of the "minister of culture."  It's my amazing friend Helena Worthen's last year organizing this conference, and I really wanted to be there... AND Judy Ancel is on the faculty!! double bonus!

That's it for May... Happy Springtime to you!

Posted by Unknown at 12:51 AM No comments: Links to this post