On May 12th my son and his family arrive in Austin from Harare, Zimbabwe to spend a week at my daughter's house.  They may have thought they'd get a little quality time with Amy and Mike away from the grandparents .... but they should have known better.  I fly down today (the 11th) and Grandpa Ron arrives on the 13th.

After a week together in TX Monique will take the family to Pasadena to hang out with her folks until June 1st, when they all come to Pittsburgh to spend two weeks with me.  YAY!!  And in the middle of their stay Monique goes to DC for training and Dan's going to TN for a wedding and I get to watch Sebastian for 48 hours.  Hooray!  I'm very excited about that.

International Sing Out for Earth Day!


My friend Hali Hammer thought it would be great if everyone in the world would sing Woody Guthrie's iconic "This Land is Your Land" at the same time on Earth Day - April 22nd.  Thousands of folks responded.  At Noon Pacific Daylight Time groups gathered in Dallas, Pittsburgh, San Francisco, New York, Vermont, Atlanta, Costa Rica, Florence, OR, Detroit, Ft Lauderdale, FL, Lancaster, PA, Sarasota, FL, Minneapolis and many other cities.
http://www.youtube.com/playlist?list=PL08806269F3A0AB22&feature=mh_lolz
The big edited version of all the performances is happening in CA right now.  I'll be sure to post a link when it's finished.

Here is Pittsburgh's version - and if you think your eyes are deceiving you, that really is Bill Oliver, Austin's "Mr. Habitat."  He was in town visiting family and joined us, then came back to my house after the video and did a wonderful concert with special guests Roger Day and Brad Yoder :

Then I was off to Harrisburg, our state Capitol, to protest Gov. Corbett's latest intrusions into women's lives and health.  My favorite sign was:


"Thou shalt not mess with women's reproductive rights"
- Fallopians 4:13

Pat Humphries and Sandy O, "Emma's Revolution" and many others performed (including me!)

Mayday, Mayday (to the tune of Daisy, Daisy)

We won't go out with the Bosses
Stuff Labor Day up your #!#sses
And we'll look sweet
When we take the street
In the glorious month of May

Of course we sang "The Internationale," and many many others.

Please send some $$ to these workers, locked out of their jobs since August 1st.  The enormously profitable American Crystal Sugar, aided by giant agribusiness, is trying to destroy the lives of 1200 loyal members of the Bakery, Confectioners, Tobacco and Grain Millers' Union (BCTGM) with their refusal to bargain and other union-busting tactics.  Let them know that they are not alone.  Send what you can to:

Thank you so much for any help you can give to these workers!

Over 1500 hellraisers gathered in Chicago May 4-6th to strategize, organize, share tips and information, tell stories about how to beat the boss - an altogether uplifting weekend.  I saw several remarkable documentaries -all of which I highly recommend -

"Brothers on the Line" about the Reuther brothers http://brothersontheline.tumblr.com/
"Abused" about the Postville, IA raids on the kosher meat-packing plant http://www.imdb.com/title/tt1737082/
"Anne Braden, Southern Patriot" http://media.gfem.org/node/10765
"Locked Out" - Rio Tinto and Boron,CA http://www.lockedout2010.org/
and my favorite...
"HEIST! Who Stole the American Dream?"  (which you can order directly from me for $20 +$2 shipping) - a fabulous film by Don Goldmacher and Frances Causey with music by me (The Corporate Welfare song) and Evan Greer (Never Surrender!)

A very touching moment of the weekend was when Jerry Tucker's daughter Tracy accepted the "Troublemakers' Award" on behalf of her most wonderful father.

Jerry is ill, and when Elise Bryant led the banquet crowd in a song of healing for Jerry, there wasn't a dry eye in the house...


On the Road Again!

I've decided to do a tour in July to see how well I hold up.  I feel terrific right now, and I'm so looking forward to getting on the road and singing again.  I'll be working my way from Santa Cruz, CA to Portland, OR and back, and I still have a few dates open that I'd like to fill.  I'm calling it the "Hard-Travelin' Tour" in honor of Woody Guthrie.  I'm celebrating his hundredth birthday this year by touring with Mark Ross and Adam Moss with a show of songs Woody wrote, or could have written.... Mark is an amazing multi-instrumentalist... banjo and guitar and many more.  When he was a kid he read Woody Guthrie's "BOUND FOR GLORY" and thought it was an instruction manual.  He's been on the road for over 40 years now.  Also joining us starting July 6th is Adam Moss, fiddler extraordinaire.  A founding member of the fabulous Green Mountain Grass, Adam (also known as 'Pickles') is in constant demand for his prodigious skills on violin and dynamic stage presence.
I hope you'll check the open dates to see if you can help with a show, and clear you calendar and tell your friends - Anne Feeney's back on the road with a honkin' wonderful show!! 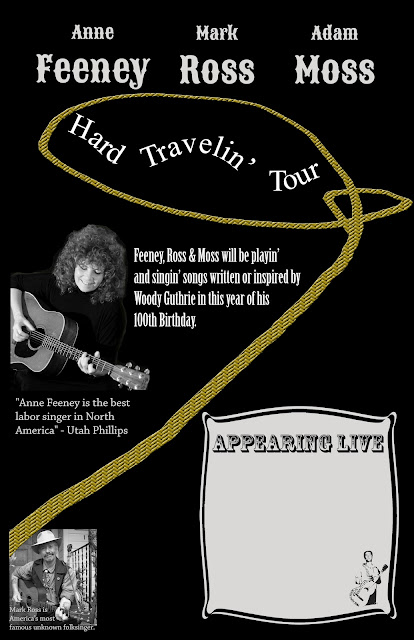